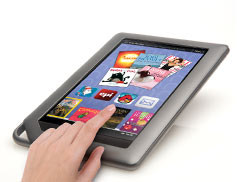 NOOK Color may not be an iPad killer but it has become quite popular since its launch as it borrows functions from both top tablets and e-readers. It is a great device to read e-books and consume multimedia files on. While many have invested in NOOK Colors, it does seen the majority of buyers are women (close to 75% of them according to a B&N executive). We have known for some time that some women have relied on NOOK Color to keep up with their favorite magazines. But that number does seem to be a bit high on the surface.

Of course, these numbers are expected to change as Amazon releases its new e-reader in November. Kindle Fire is one of the most affordable tablets money can buy. The device is optimized for e-book and media consumption. Its cloud-based browser, Silk, is another strong selling point for it. With the next generation NOOK Color already in the works, it will be interesting to revisit these studies in a few months.

What’s your take? Are women more in love with NOOK Color than Kindle?