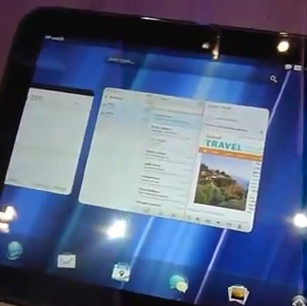 HP is not willing to sit on the sidelines and watch Apple and Android tablet makers dominate the market. The company has announced its plans to bring an iPad-like webOS tablet to the market soon. HP’s TouchPad sounds like an exciting device but it will need developers’ support to survive. The fact that Amazon intends to bring Kindle app to HP’s brand new tablet should be a big news for the company and its fans.

Amazon may have some issues to work out with Apple. But it is not just focused on Apple products when it comes to its Kindle apps. Amazon intends to bring Kindle apps to all relevant platforms.

When you buy a Kindle book, you can already read it on Kindle and our free ‘Buy Once, Read Everywhere’ apps for iPad, iPhone, iPod touch, PC, Mac, BlackBerry, Windows Phone 7, and Android-based devices, so you never have to worry about what to do with your books if you change devices or platforms… We’re very excited to add webOS to this list. As with our other Kindle apps, the webOS app will be free and will incorporate our Whispersync technology so you can seamlessly switch between devices and platforms and never be without your reading,

said Dorothy Nicholls, Director, Amazon Kindle. Considering that HP plans to adopt webOS on more than just its tablet, Amazon may get good value for its efforts for this platform. At the same time, there is no guarantee that HP’s tablet will be successful at all.

We’re working with Amazon to bring HP customers the free Kindle app and, along with it, the largest selection of the most popular books… TouchPad’s beautiful, fully featured Kindle app supports the Kindle features users already know and love, and it’s one of the first Kindle applications to support the latest Kindle features like Collections,