Piracy is a huge issue in the world of digital content. People have been downloading and illegally sharing music, books, and movies for many years. Just recently, the Homeland Security and the Department of Justice have started going after websites that link to illegal content (e.g torrent tracking sites). While most of these efforts are geared towards music and movies, the e-book industry need not be forgotten. 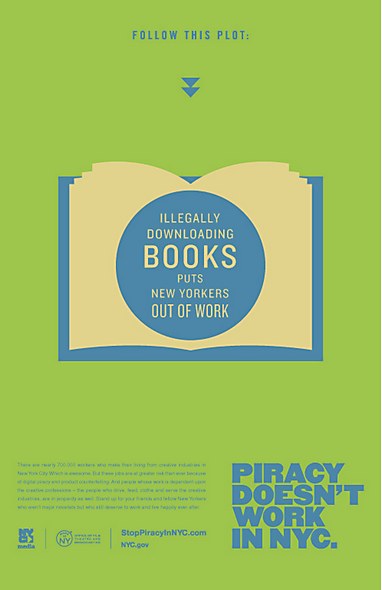 New York is fighting back against piracy by taking its “piracy doesn’t work in NYC” to the streets. Not everyone is as conservative with their approach. Dana White, the UFC president, is going after the pirates and plans to put them in jail. But he does admit that his content is much different from music files and e-books:

You’ve got to understand, all this stuff is brand new. Even when the music thing happened with Napster and all that stuff, if I take your song and let people download the song, the song isn’t ruined. People still want to hear that song or the album or whatever it is. When our event gets stolen, it’s dead. It’s over. You know the results. A live event is different than anything else

Taking a tough stand against e-book pirates is one way to tackle this issue. Perhaps it is more beneficial to publishers and authors to take a look at the main reasons people pirate books. Are e-books too expensive or too restrictive with their DRMs? Could the fact that people can’t sell back their e-books once they are done with them contributing to this issue?

We do believe that educating the public could help reduce e-book piracy. But the current e-book business models have fundamental flaws that need to be fixed if authors/publishers expect the issue piracy to disappear in the near future.