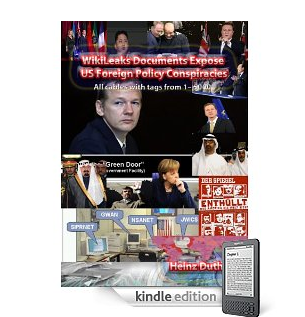 Amazon has had its best year ever as far as selling Kindles and e-books. Unfortunately, it has had to deal with some avoidable controversies in the past couple of months. A few weeks ago, the company got in trouble by allowing a book about pedophilia to go on sale in its Kindle store. The book was removed from Amazon.com eventually but not before Amazon upset many of its loyal customers. Surprisingly, the company has put itself in a tough position with its stance on Wikileaks. Not only it kicked Wikileaks off its servers, it is making money from a book on Wikileaks and the leaked cables. This is happening on Amazon’s UK store but the story has still managed to get some coverage in this side of the world.

Here is the product’s description as displayed at the time of this writing:

The batch of 250,000 US classified documents released by WikiLeaks to several news outlets, some of whose content was made public Sunday, sheds new light on the sordid nature of American imperialist intrigue and conspiracy around the globe.

The Author will analyze the documents more thoroughly in a subsequent article, but “highlights” published by the Guardian and the New York Times are revealing.

The leaked material consists of classified cables from US embassies, some dispatched as recently as early 2010. The cables, most of which date from 2007-2010, contain US officials’ comments on foreign governments and leaders and speculation about the activities and maneuvers of the latter, as well as details about American foreign policy operations.

In a revelation that should surprise no one, the US State Department and American diplomacy in general turn out to be a vast nest of spies.

The Guardian explains that the WikiLeaks documents “reveal how the US uses its embassies as part of a global espionage network, with diplomats tasked to obtain not just information from the people they meet, but personal details, such as frequent flyer numbers, credit card details and even DNA material.

It is not surprising to see Amazon customers attack the company over this. After all, if Wikileaks is engaging in illegal activity, why is Amazon making money off of this. Here are some of the comments this book has received:

Shame on you, Amazon. You squirm and bow before a chickenhawk like Joe Leiberman and deny Wikileaks freedom of expression. Then you try to make money out of material that is available elsewhere for free. I can see where your moral compass points,

said Malachai. This book’s product page is filled with hate comments about Amazon and its actions against Wikileaks. 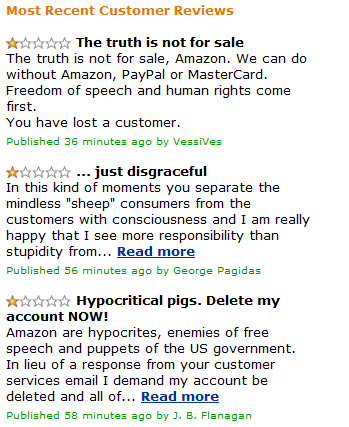 Hackers did plan to hack Amazon over how it treated the Wikileaks group. It seems those efforts have not been successful. Regardless of what one thinks of Wikileaks and what it has done, this is a controversy Amazon did not need at this time of the year. The past 2 months have demonstrated Amazon’s need for a better PR strategy. The world and how people get their content and information are changing fast. Amazon needs to prepared to better respond to these types of crisis.

If you were in Amazon’s shoes, how would you deal with Wikileaks?