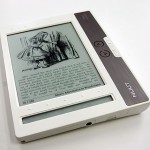 Kindle 2.0 may be the top e-book reader in the market, but it also has a bull’s eye on its back as other companies try to grab their piece of the e-book market. Nuut was one of the first challengers to Kindle. Unfortunately, the first one didn’t exactly come up with enough innovative features to trump Kindle 1.0. Nuut 2.0 picks up where the first generation Nuut left off. The device comes with a 6 inch screen and wi-fi capability. It also supports SD cards and comes with 1GB of memory. It does look a bit like Kindle 1.0, but it is definitely more capable in some areas (e.g. 8 shades of gray, doc formats).

The problem is Nuut 2 doesn’t stack up too well against Kindle 2.0. Kindle 2.0 has the edge in most areas. Neolux Nuutbook 2.0 does support PDF and ePub, which could make this attractive to those who want to use those formats. Given that the device will probably don’t be released globally, we will probably won’t hear too much about it. Still, e-book manufacturers should learn from Neolux and offer support for open doc formats if they want to have any chance of competing with Amazon.