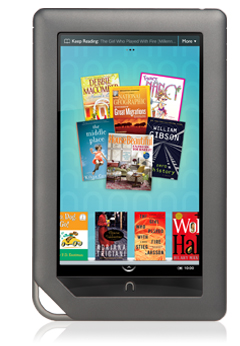 There has been a lot of talks about how great of an Android tablet XOOM is. Motorola XOOM has everything a tablet would need to go against Apple iPad effectively. B&N NOOK Color has been going a bit under the radar in the past few months. While devices such as Samsung Galaxy Tab and XOOM have gotten a lot of coverage, NOOK has been selling like hot-cakes. This device may be promoted as an e-book reader but it can be easily rooted and turned into an affordable Android tablet.

With B&N releasing a new software upgrade to bring more applications to the device, NOOK has a lot of momentum behind it.

NOOK Color will get even better this Spring when a major update to the device’s firmware will offer customers access to explore exciting new applications, e-mail and many other requested features.

Of course, NOOK owners do not have to wait for B&N’s software release to install all kinds of applications on their mini tablet. We criticized B&N when it decided to focus its efforts on an LCD-based e-reader a few months ago. As it turned out, that was not a bad move at all. Considering how cheap Kindle 3 has become, it has been almost impossible to compete with. NOOK Color is different enough for Kindle to capture the attention of the consumers.

NOOK Color should still be a bit cheaper. Android tablet prices will surely drop in the near future. B&N can keep the momentum for the NOOK platform going by bringing its tablet’s price under $200. Will the company bring a more sophisticated NOOK tablet to the market in 2011? We will have to wait and see.