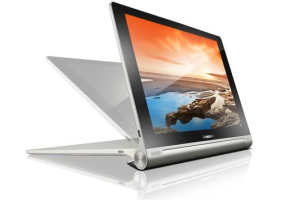 Lenovo’s Yoga tablet is getting an upgrade. The Lenovo Yoga 10 HD+, which was announced at Mobile World Congress in Barcelona this week, has the same design but offers a higher resolution display. It will have a 10.1-inch 1920 x 1200 screen in addition to a 1.6GHz quad-core Qualcomm Snapdragon 400 processor. The device also has 2 GB of RAM and a 8MP camera.

The Lenovo Yoga 10 HD+ will run Android 4.3 Jelly Bean but an update to Android 4.4 KitKat is in the works. The Yoga Tablet HD+ will be released in April for as low as $349. Not a bad device on paper but I would like to see these new tablets ship with the latest version of Android.