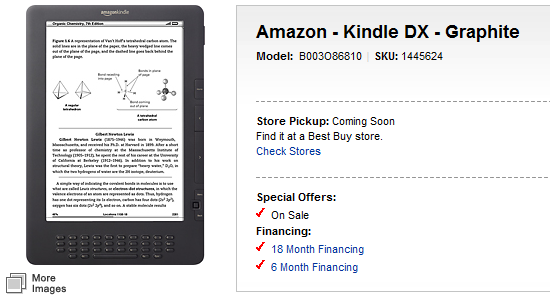 Amazon Kindle DX is truly an interesting device. Amazon launched the device a while ago to target college students and business professionals. It may have the same screen technology as Kindle 3 but it is still running an older generation software. The device used to sell for around $500 but Amazon had to drop its price to $379 to keep it competitive against tablets and alternative devices.

Kindle devices usually do not get discounted on Amazon. In fact, Amazon has already been quite aggressive when it comes to pricing Kindle 3. So it is surprising to see Kindle DX Graphite getting a major discount on BestBuy. BestBuy is offering the device for only $299. Interestingly enough, Amazon has still not dropped its own price.

Kindle DX may be a wonderful e-book reader. But Amazon won’t be selling too many of these without a major price drop. Apple iPad 2, Xoom, and Samsung Galaxy may not be E-ink readers but they do not cost a whole lot more than a Kindle DX. Let’s not forget that the original Kindle was priced $399 at first. Kindle 3 is now selling for as low as $139.

All signs point to Amazon dropping Kindle DX’s price sometime soon. There is a good chance a new Kindle DX will make its debut later this year. Could it be the rumored tablet Amazon seems to be working on? That is not clear at this point.