Die hard Kindle fans may find this hard to accept, but Apple iPad is the most formidable challenge Amazon Kindle has had to face in the past few years. B&N Nook and Sony Readers have been decent Kindle competitors. Apple iPad is more of a game changer. This tablet does not have an E-ink screen, but it does have thousands of applications its users can choose from to enhance their tablets’ capabilities. According to ChangeWave Research, the e-reader market has become a two race horse between Apple iPad and Kindle. As it turns out, the iPad may have the upper hand in this “race” for now. 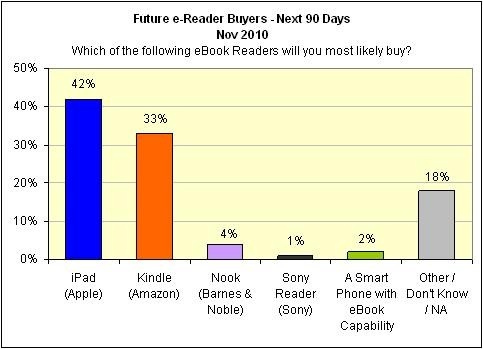 Since the last ChangeWave survey in August, Amazon Kindle’s share has dropped to 47% (down 15%). In the same period, Apple iPad has gained 16%, seeing its share improved to 32%. Apple iPad owners seem to be more satisfied with their device than Amazon Kindle owners. That has possibly helped increase the iPad’s momentum in this market. Considering all the magazines that are being launched for Apple iPad, the device has a lot going for it and should reach new heights in the next few months (Apple iPad 2 is rumored for January 2011).

At this point, it is not clear how consumers are responding to Nook Color. We will have to wait until the next survey is out to see whether that device has a bright future. Amazon is rumored to be working on its own Android tablet in addition to its Android app store. It will be hard for B&N Nook and Sony Readers to stay relevant without any major innovation.