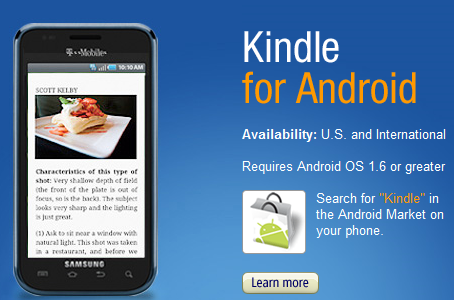 Since we found out that Amazon was planning to launch its own Android network, we have been wondering whether Amazon is working on an Android tablet to go with it. Let’s face it. Jeff Bezos is not willing to compromise the Kindle experience even if it means the Kindle going without a color screen for the next couple of generations. That does not mean that Amazon can’t bring a tablet to the market to compete with Nook 2.

As Jason Perlow at ZDNet reported, Amazon does have everything it needs to bring a decent Android tablet to the market. The company does have the Kindle store, Amazon Mp3 and Amazon Video to give its secret tablet plenty of content from the get go. The only thing missing from the puzzle seems to be that app store (Amazon is in the process of taking care of that problem).

It’d be interesting to see what type of tablet Amazon will opt to sell. Nook 2 is a very interesting Android tablet but it is not exactly an iPad killer. That device is designed for those who want to get a tablet to surf the Internet and read e-books without the other bells and whistles that more expensive tablets offer. My guess is, Amazon won’t be involved in the premium tablet business. The company’s business model is very much different from Apple, so it won’t be trying to out-iPad the iPad.

Jeff Bezos may not be interested in releasing a color screen Kindle anytime soon, but there is no reason it can’t have success with an Android tablet of its own. Nook 2 could be in big trouble if Amazon decides to pull the trigger on this move.

What’s your take? What features would you like to see in Amazon’s secret tablet?