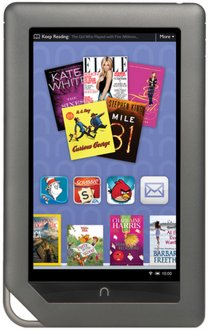 It is no secret that Microsoft has been going after Android device makers over licensing fees. Reports indicate that the company is making a good chunk of money by forcing Android partners to pay up a fee for each device sold. B&N won’t be an exception. Microsoft has already accused B&N of patent infringement over its use of Android. Having to pay up more fees to Microsoft over Android would be another setback for B&N.

Microsoft is embarking on a campaign of asserting trivial and outmoded patents against manufacturers of Android devices … Microsoft is attempting to raise its rivals’ costs in order to drive out competition and to deter innovation in mobile devices.

B&N explains in a letter to Gene Kimmelman, the Justice Department’s chief counsel for competition policy (as published on Bloomberg). Microsoft is undeterred though. It has already filed a complained with the ITC and seeks to ban the import of B&N NOOK Color units.

Microsoft’s intentions are pretty clear. By raising the cost of Android partners, Microsoft is hoping to keep its own platform going strong. Making a ton of money off of Android device makers over licensing fees is not too bad either. It will be interesting to see how B&N handles this case, considering that Samsung and HTC have already agreed to pay up to Microsoft. Could B&N rethink Android on NOOK if it loses this case? We will have to wait and see.