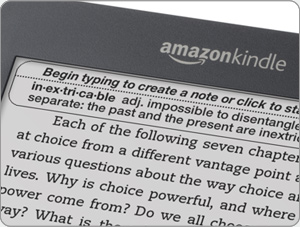 The adoption of the “agency model” by a few top publishers in the U.S. generated a lot of outrage on the consumer side. Amazon promised at the time that it would fight such a model. Top publishers were still able to push through and force Amazon to sell e-books at the prices they wanted. It seems some UK publishers are ready to adopt an agency model as well. Amazon announced the news on its UK blog:

as we feared, the US agency publishers (Hachette, HarperCollins, Macmillan, Penguin, and Simon & Schuster) raised digital book prices almost across the board. These price increases were not only on new books, but on older, “backlist” books as well (in the industry, “backlist” books are often defined as books that have been published more than a year ago). Based on our experience as a bookseller setting consumer prices for many years, we know that these increases have not only frustrated readers, but have caused booksellers, publishers and authors alike to lose sales.

Amazon plans to fight this, but if we go by how things worked out in the U.S., top UK publishers will probably pull this off there as well. Many top publishers have argued that publishing e-books does not necessarily reduce their costs. Some authors have even called e-book buyers spoiled. Amazon promises to keep the prices low as long as it can:

In the UK, we will continue to fight against higher prices for e-books, and have been urging publishers considering agency not to needlessly impose price increases on consumers. In any case, we expect UK customers to enjoy low prices on the vast majority of titles we sell, and if faced with a small group of higher-priced agency titles, they will then decide for themselves how much they are willing to pay for e-books, and vote with their purchases.

The reaction to this news has been mostly negative as it was the case in the U.S. People just don’t want to pay more than they have to for e-books. Amazon Kindle is not a free device. Besides, e-book buyers can’t sell their e-books or trade it in for a new e-book and save money in the process. Will a boycott work? It did not work in the U.S., did it?

Are you for or against “agency model?” Why?