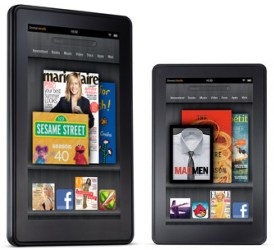 Amazon has had a decent amount of success with the Kindle Fire already. But the tablet market is highly competitive so the company can’t afford to relax for too long. Amazon is going to continue offering its budget-tablet for the foreseeable future.  THe China Economic News Service reports that the company could roll out three new tablet models to improve its position in the tablet market.

The story suggests that Amazon will launch a medium / high-end 7 inch Kindle Fire in the upcoming months. A high-end 8.9 inch tablet could be in the works as well (with 1920 * 1200 resolution). Amazon is going to stick with Android for these devices. The Amazon Kindle team understands that screen quality matters big time to tablet shoppers. A premium 8.9 inch Kindle Fire could be a hit as long as it is priced aggressively.

The current generation Kindle Fire has its merit. But it is not even close to being the best tablet on the market. It will be interesting to see how Amazon’s premium tablets will fare against the iPads and ASUS Transformers of this world.