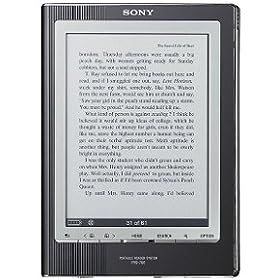 Amazon Kindle may be the king of the world in the e-book reader market, but that doesn’t mean other companies are sitting around, ready to give up, especially Sony. Sony was in the market way before Amazon, and it doesn’t intend to give it up without a fight. The content partnership deals that Sony has been striking has rejuvenated Sony reader’s fan. And things are going to get a whole lot better as Sony is planning to release 2 new e-book readers and reduce its e-book prices to compete more effectively with Amazon.

Sony Reader pocket and touch editions are the two new Sony readers that will be sold for $199 and $299 respectively. Sony is also addressing its content issues by reducing its e-book prices to $9.99. These devices use the same E-Ink technology used in other e-book readers in the market to make reading easier on the eye. The Touch edition is actually a touchscreen reader that lets you turn pages and do things with your fingers (like you would on your iPod Touch). So it’s certainly an interesting development.

According to a few reports, Sony will not be supporting wireless connection with these e-book readers. If that is indeed the case, it’s going to be very disappointing as I truly believe no single device can compete with Amazon Kindle without wireless capability. It will be interesting to see how these devices stack up against Amazon Kindle 2 and other e-book readers on the market, but one thing is for certain: Sony needs to stop following and start becoming a leader in this market if it has plans to make it big in the e-book industry.