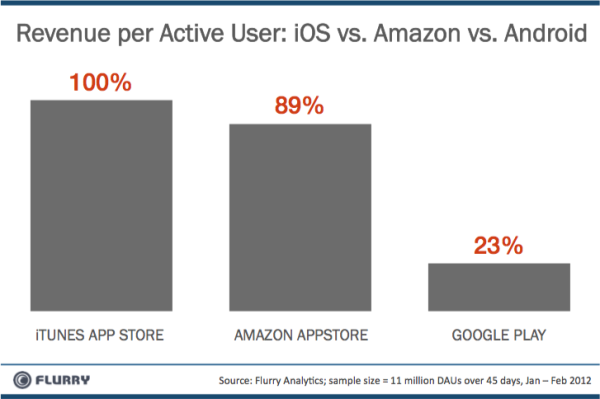 Amazon Kindle Fire was always going to be a device for media and app consumption. Amazon may be losing some money per each Kindle Fire sold. At the same time, it is making a ton of money in e-book, media, and app sales. According to mobile advertising firm Flurry, the Amazon Appstore generates 89% of the revenue for in-app purchases in comparison to iTunes.

stated Flurry’s Peter Farago. Apple is still making a whole lot more from apps. But Amazon is holding its own. This research will bode well for the future of the Amazon Appstore. Developers are attracted to stores that give them the best chance to get more revenue from their efforts. Amazon’s Android app store seems offers app programmers just that.

It will be interesting to see what Google will do to improve its apps revenue. So far, Amazon is showing others how to get it done.