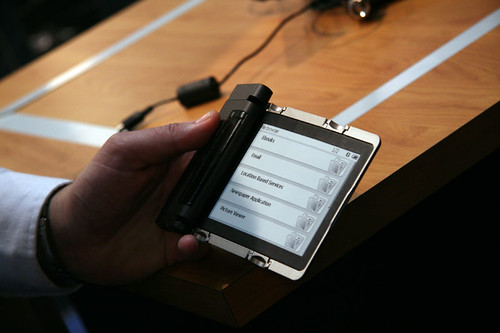 Kindle 2.0 may be the top dog in the e-book market, but there are a few start-ups that are trying hard to come up with a true challenger to Amazon Kindle. Amazon may not exactly be looking forward to having a fierce challenger in this market, but when companies compete, consumers win. With that in mind, here are 4 e-book readers that I look forward to testing later this year / early next year.

1. Plastic Logic: Plastic Logic is a big touch screen reader that has created a lot of buzz on the web. It is expected to be released in 2010.

2. Txtr Reader: Txtr Reader is another capable e-book reader, and it comes with wireless capability as well. It has an API too.

3. Readius: Readius was expected to be released 2008, but it seems the manufacturer has had difficulties distributing the gadget due to the tough economic conditions in the U.S.

4. Boox: Boox by Onyx is another cool e-book reader that is worth a look. It comes with Wi-Fi capability and text-to-speech. It’d be interesting to see how these guys deal with the Authors Guild.

There will be more eBook readers on the way. Amazon has set the bar really high, which is forcing some of these companies to go out of their way to try and beat Amazon in its own game. Is a Kindle killer among these devices? That’s a whole other story.