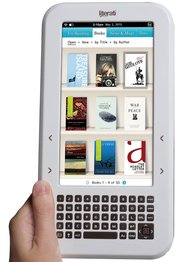 A couple of years ago, everybody expected color-screen e-readers to be the future. That has not changed yet but companies such as Amazon and B&N are still in the process of figuring out a way to introduce such e-readers without having to jack up their prices dramatically. Color E-ink technology still needs some work and is not as cheap as it should be for Amazon to fully adopt it. For those who can’t read on a grayscale screen, there are always LCD-based devices such as The Literati. It’s a budget color e-book reader (by Sharper Image) that offers a color-screen and costs only $150. Is it worth buying? That’s another story.

At this point, The Literati is priced higher than Kindle 3 WiFi, which is curious to say the least. The color-screen feature is nice to have but not a decisive factor for most e-book fans, considering that most LCD-based e-reader fans tend to go with Apple iPad.

Here are the known specifications for this device:

The Literati is expected to show up in Best Buy, Macy’s, Kohl’s, Bed Bath & Beyond starting in October. Does it have a chance to succeed? Let’s just say it won’t kill Kindle. But it does fill a gap in the e-reader market. Not everyone is interested in paying $500+ for an iPad. The Literati provides e-reader fans with an affordable alternative. The price should probably be a bit lower though.

Are you impressed with the Literati?