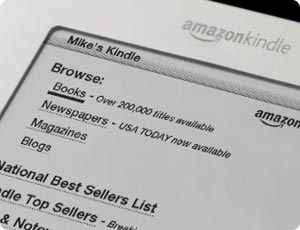 When the first Kindle came out, many experts claimed that it will never be successful. Some claimed that no one would pay $360 just to read books. Fast forward to 2009, and Amazon has already sold 300,000 Kindle 2.0 units. That is great news for Amazon. The first generation Kindle sold about 500,000 units in its lifespan. Kindle 2.0 is threatening to top that in less than 6 months. And we need to take into the account the negative effect of the recession in the U.S. and millions of people being unemployed.

This is great news not only for Amazon but also for the green movement. Green technologies are often considered pricey and overrated. Kindle may be a bit expensive, but it’s certainly underrated, if anything. Nevertheless, if you can sell a $360 device this well in these tough times, there should be hope for other green products as well. On the flip side, Amazon has not really positioned Kindle as a green gadget. We certainly haven’t seen too many Kindle ads pointing out this issue. So the jury is still out on whether people are buying Kindle to save the environment or just save money.

Amazon selling 1 million Kindle units this year would be a crushing news for other e-book makers in the market. They can take heart from the fact that the e-book market is growing, but will they be able to put up a good challenge against Amazon Kindle? Companies have been trying to kill the iPod for years but to no avail. Can we see the same pattern of events manifest with Amazon Kindle? Time will certainly tell.