Unlike netbooks, tablets are here to stay. They are expected to surpass notebooks by the end of this year. As IDC is suggesting, tablet shipments will grow by more than 58% in 2013, surpassing shipments of laptops. According to IDC’s forecasts, tablet sales are going to surpass PC sales by 2015. This could vindicate Microsoft’s approach to developing Windows 8. 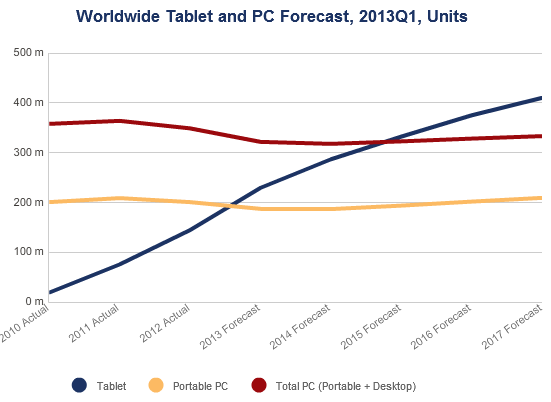 Apple has been dominating the tablet market for a couple of years. The rise of budget Android tablets has changed things around though. The Kindle Fire HD and Nexus 7 are just a couple of devices that have grabbed the attention of tablet shoppers. The iPad mini is a pretty decent tablet but costs considerably more than those two.

IDC is suggesting that tablets with screens smaller than 8 inches will become the largest segment of the tablet market this year. Yet another reason Apple won’t release an iPad Maxi.