E-ink is quite an exciting company that is behind the e-paper displays in Kindles and NOOKs. E-ink devices have gained traction in the market in the past few years. But E-ink seems to have trouble making enough money these days. It had to post $27m in losses in Q1 2012. The net sales fell 53% on Q4 2012, which is very disappointing.

The fact that people are buying more LCD-based devices these days could have contributed to E-ink’s ugly financial report. This is the first time E-ink has had to post a loss in 2.5 years. Companies such as Amazon are expected to continue using E-ink displays in the future, so all is not lost for the company. 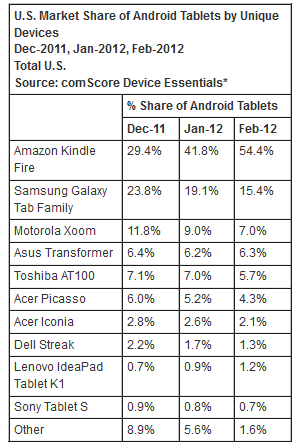 Speaking of LCD tablets, the Amazon Kindle seems to be the #1 Android tablet at this point. That is according to a report by comScore. The Kindle Fire was introduced in November 2011 but has gained traction in the tablet market quickly. Amazon may not be making a ton of money from Kindle Fires right now. But it is selling a significant number of them. It will be interesting to see how the Kindle Fire 2 performs when it is released to the market later this year.